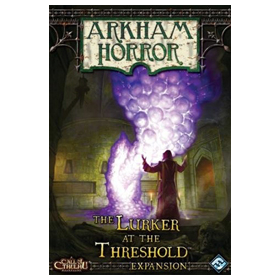 Across Arkham, strange doors to other worlds have been opening. They seem to be a living part of an ancient and arcane creature that has been reaching out, tempting the unwary with eldritch power. Now people are vanishing without a trace, and it’s up to a handful of bold investigators to confront the profane being who dwells just beyond these passages. But even working together, will they be able to destroy these unnatural and deadly gates without themselves striking a terrible bargain with the Lurker at the Threshold?

The Lurker at the Threshold is an expansion for the Arkham Horror board game by Fantasy Flight Games.

Arkham Horror The Lurker At The Threshold Expansion Contents:

This is not a standalone product. A copy of Arkham Horror is required to play.

Publisher:
Fantasy Flight Games
Item Code:
VA63
Just recently got Lurker at the Threshold and if you want a way to seriously crank up the difficulty then this is it but that doesn't mean you aren't in for a fun ride. Lurker can be combined with most expansions very easily although it also works well with just the base game. Lurker adds a new dynamic with relationship cards, you gain boosts from other players and it promotes teamwork. Also included are new gates, some are really annoying such a devourer gate than if it opens up on your investigator will instantly devour them, others are pretty nifty like the split gate or the monster gate that acts like a monster. Even better is the new rule for gate burst, sealing no longer means that the area is completely safe, at any moment it could burst open and uh oh that's five clues wasted. Reckoning cards were a hit with my gaming group, most managed to stay away from taking pacts but when the reckoning cards came into play they really regretted it. All in all an awesome expansion for an awesome game. Well worth getting even as your first expansion.
Mark Tresidder 11 Apr 2011, 00:49
Write a review