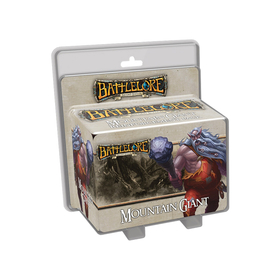 What's more, this Reinforcement Pack includes a pre-built scenario: The Sound of Thunder. In this scenario, the Uthuk Y'llan call upon the power of the Mountain Giant in order to liberate prisoners captured by the Daqan Lords. Whether you use the Mountain Giant in this scenario or muster him with your army, he brings an undeniable threat to every game of BattleLore 2nd Edition.