Out of Stock
Cart is empty
Cart is empty
View cart
Home/Miniatures/Malifaux/Malifaux 2nd Edition: Tortoise and The Hare Story Encounter 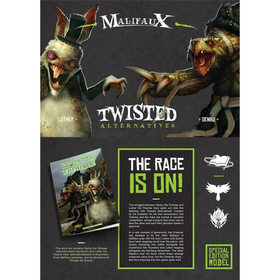 Tortoise and Hare, Winter and Spring. The battle between Genbu the Tortoise and the Pascha Hare is as old as time itself. Now, their battle spills out onto the tabletop with these two alternate sculpts! This story box contains Genbu the Tortoise (alternate Izamu) and the Pascha Hare (alternate Blessed of December), three Malifaux scenarios, and an adventure for Through the Breach.

This box set, containing two 32mm 'heroic' scale miniatures and their stat cards, is made from PVC and comes fully assembled.

Pascha Hare (can be used as an alternative Blessed of December)

Genbu the Tortoise (card contains all rules for Izamu the Armor)

Genbu (Scenario use only)

Luther (Scenario use only)

2 Upgrades (Scenario use only)